The Agreement between the Taipei Representative Office in Poland and the Polish Office in Taipei on the Legal Cooperation in Criminal Matters was signed by Weber Ven-bin Shih, Representative of the Taipei Representative Office in Poland, and Maciej Artur Gaca, Director General of the Polish Office in Taipei, on June 17, 2019. Signing ceremony witnesses included Taiwan’s Minister of Justice Tsai Ching-Hsiang and Minister of Foreign Affairs Jaushieh Joseph Wu, and Poland’s Undersecretary of State of the Ministry of Justice Łukasz Piebiak. Per the provisions of Article 16, the agreement was to enter into force after the two representative offices notified each other in writing when the internal procedures necessary in their respective territories were completed.

In Taiwan, the agreement was reviewed and approved by the Legislative Yuan, transferred by the Executive Yuan to President Tsai Ing-wen, and notified in writing by the Taipei Representative Office in Poland to the Polish Office in Taipei. As per Polish practices of transformation from agreement to domestic law, Poland’s parliament passed the related Act on the Principles of Cooperation in Criminal Matters between Poland and Taiwan, which President Andrzej Duda signed on January 28, 2021. The Polish Office in Taipei notified the Taipei Representative Office in Poland of completing all necessary procedures on February 23, resulting in the agreement entering into effect on the same day of receipt of the notification.

The agreement covers five main areas of cooperation: mutual assistance on criminal legal matters, extradition, prisoner transfer, exchange of legal and practical insights, and sharing of information on crimes and crime prevention. Under the agreement, the competent authorities of the two countries may contact each other directly rather than having to use diplomatic channels. In addition, the authorities may communicate in English and need not provide translations of all documents in the other country’s official language. These provisions aim to enhance the efficiency and effects of judicial cooperation between Taiwan and Poland.

Taiwan and Poland have long enjoyed close judicial cooperation; for instance, Taiwan Miaoli Prosecutors Office smoothly took legal action against the defendant who set up a machine room for fraud in Poland due to the Polish authority actively provided relevant evidence. The agreement is expected to make such cooperation more seamless after the agreement takes effect. Currently, there is one Polish national serving a sentence in Taiwan. Taiwan’s Ministry of Justice and Poland’s Ministry of Justice will arrange for the Polish national to be transferred to Poland following the agreement and Taiwan’s Transfer of Sentenced Persons Act, thereby not only attaining justice through executing the punishment but also demonstrating a humanitarian spirit to carry out rectification.

The agreement with Poland is Taiwan’s first wide-ranging agreement on judicial cooperation in criminal matters with an EU member state. Inspired and invoked by the agreement, Denmark and Switzerland signed agreements on the transfer of sentenced persons with Taiwan hereafter in 2019 and 2020 respectively, establishing even closer relationships with European countries.

Based on the agreement, Minister Tsai with staff were invited to take part in the activities of “European Day of Remembrance for Victims of Totalitarian Regimes” by Poland’s Ministry in August 2019, interacting with senior officials from European countries to learn the history in the Central and Eastern Europe, and seeking to further demonstrate its commitment to protecting human rights, upholding the rule of law, and combating crime through international judicial cooperation.

Taiwan’s Ministry of Justice will continue to work with the Ministry of Foreign Affairs and overseas missions to sign more agreements on judicial cooperation and enhance judicial exchanges with countries all over the world to achieve judicial justice. 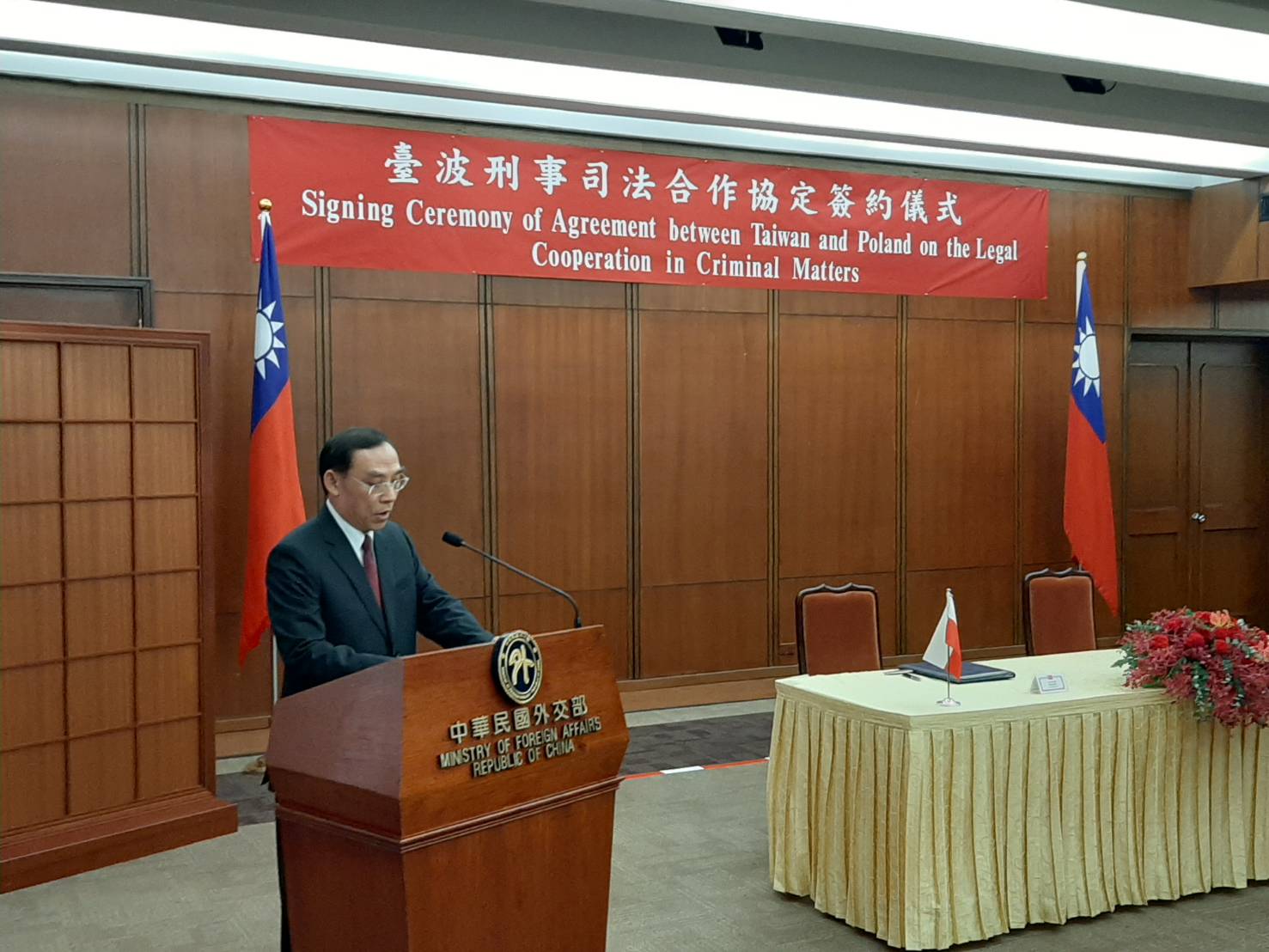